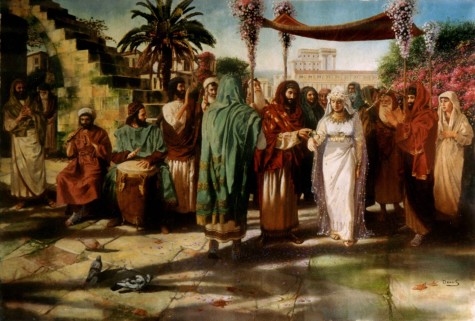 When Jesus had finished saying these things, he left Galilee and went into the region of Judea to the other side of the Jordan. Large crowds followed him, and he healed them there.

Some Pharisees came to him to test him. They asked, “Is it lawful for a man to divorce his wife for any and every reason?”

“Haven’t you read,” he replied, “that at the beginning the Creator ‘made them male and female,’ and said, ‘For this reason a man will leave his father and mother and be united to his wife, and the two will become one flesh’? So they are no longer two, but one flesh. Therefore what God has joined together, let no one separate.”

“Why then,” they asked, “did Moses command that a man give his wife a certificate of divorce and send her away?”

Jesus replied, “Moses permitted you to divorce your wives because your hearts were hard. But it was not this way from the beginning. I tell you that anyone who divorces his wife, except for sexual immorality, and marries another woman commits adultery.”

The authentically Christian view of marriage and divorce is despised as much by those who claim to follow Christ as those who do not. Consistent Biblical mandates about the headship of the husband are transformed into the husband submitting to the whims of his wife. Consistent Biblical mandates about the submission of wives to their husbands is seen as oppressive even in Christian circles. Even when the concept is accepted, there is a substitution for the extra-Biblical construct of “mutual submission”. If mutual submission, why not mutual leadership? The two are the same, and both are clunky ways of saying “Democracy”. Is that really how Jesus relates to His church?

As badly as Christians misrepresent Christian teaching about marriage, the Christian teaching and treatment of divorce is even worse. Jesus declares that divorce is never right, and remarriage after divorce except for sexual immorality is adultery. Somehow, modern Christians have got it into their heads that divorce is right in myriad circumstances. Emotional abuse and unhappiness are frequently used as excuses for divorce, despite the fact that both of those entirely subjective measures are not mentioned once in all of Scripture as a cause for divorce.

Modern Christians often have no problem with divorce and are blind to the overwhelming moral qualities of it. The rest might have a problem with something, but it isn’t divorce itself. Often, and despite not being treated as leaders in their home, husbands are blamed for the negative behavior of their wives – including divorce if it occurs. Instead of blaming the person who initiates a divorce (which is usually the wife), Christian leaders blame the husband for not doing enough. This contradicts Christ, who gives no circumstance that ever justifies divorce, and Paul, who always describes the roles of husband and wife as unconditional.

If Christians want to learn to follow God’s Will, they could certainly do worse than following his clear moral teaching on marriage and divorce. As it stands, it’s a bit of an embarrassment to be surrounded by Christian leniency toward divorce when one of the chief complaints that non-Christians have about Christianity is the hypocrisy of it’s adherents.

6 thoughts on “Jesus on Divorce”